The Leaning Tower of Mayen

Bernd Brück from Germany , a German Zimmermann (Carpenter), sent me a PDF file with the story of rebuilding the Leaning Tower of Mayen after world war 2. It's pretty interesting, on how the roof framing geometry is designed by rotated and offset Octagons, which in turn forms the leaning twisted spiral tower.

When speaking of crooked and twisted spires, the name Mayen will always fall. In a number of publications, the "German Master carpenter "about this unique ancient monument reported in the bombing of the last war,  with a large part of the Old Town, this sexy Eiffel tower rubble fell.

The Mayener are tough. Thus grew because soon after the war the tower walls of St. Clement's Church again in the sky, only the spire, the crowning of the building, was still missing. In the spring of vergangenen Year it came down to it, that one is more detailed thoughts about his design made. Some were for a new, straight-building;

However, the majority of Mayener wanted known landmark of Mayen, the "leaning See built on · again. Ancient form tower ". For a version in steel, to which one first had thought, in particular the men turned ·Gehrüder Rosenbaum, Zi ~ ergeschäft and sawmill in Mayen, the later the execution of the new wooden tower Helms took over. Design and static Calculation was in the hands of the Consulting in Karlsruhe. Was originally thought only the rotation of the spire to restore and to refrain from the Uber slopes of the peak, so should now be the new spire of the old as possible same.

Well yes Turmkons constructions anyway not an everyday Task, but twisted and crooked already not at all. According to the literature on verdrehte towers it's almost been exclusively design flaw, led to deformation - such had of course, be avoided. Only about a 100 year old work, "The work of art in all rooms its parts "vori Andreas Romberg, we could remove some recb.l valuable information.

The author has sieve in this extensive Bum also with the., Construction wooden Thunuspit ~ s "concerned and a number heed cheaper receivables aufgestellt, of which we will mention only a few. So should the construction in Inner possible glues held however, the roof panels are self-reinforced to the commission of the tower and the later ere control the components not to unnecessarily obscure; the Longitudinal forces should only end grain to end-grain be rendered in order not dUrd: l uneven Subsidence occur later Vertormungen; according to several years overdue repair work is it width that all woods are connected so that they can be easily replaced without di ~ Star: dfestigkeit of the building while impaired ~ ud. Hmzu came in the case Mayen still the verständhche Request of the executive master carpenter by Aufrichtarbeit easier.

The result of all considerations led us first to two designs. The first draft was the roof sheathing used for carrying with it So was a nailed-shell structure; scheduled were 8 struts, on which at a distance of about 80 cm planks nailed wreaths are placed should. The advantage of the light and the Abbunds extensive adaptability to the shape of the old spire stood but they also have disadvantages. So have the quest, as they no shock to Break point had to be carried out, a large obtain overall length and makes the erection; the upper part of the tower would be because of the Anhäufunq of structural timbers at the break point not from the inside been accessible; Finally, it would later have may be adversely affected during repairs, down when D1E whole construction into the roof had.

For this reason, we chose the second design, the design shown, - everyone could connect receivables in happier ways.

The Rising masonry has an exterior of  rd. 6.45 X 6.75 m, that is not exactly square. to the supports of the belfry - a reinforced concrete ring beam, of 24m above the ground is - is the wall thickness of 1.00 m. Furthermore rise in the four sides of the tower, the 70 cm thick pediments with the scarf holes. From Glockenstuhlauflager to up the gable peaks are 6.00 m. The wooden tower construction consists of a lower part with joists above the belfry; also rises the real helmet with a height of 21.00 rn., it is divided into 5 equal floors, each 4.20 m.

The substructure is the Dbergang of the square base of the tower to the eight-vertex of the helmet. The outer diameter of the octagon circumscribed circle was 6.60 m laid down; the difference - which arises from the fact that the superstructure regularly, the base is irregular - was settled by the roof membrane, since otherwise have been without the vevgrößert! ün existing difficulties in joinery unbearable would.

In the tower corners and in the middle of the tower walls are in the area of ​​the bell chair Post net and arranged by joists and ceiling joists connected to. The in Middle wall standing posts (Fig. 1) are in each case by two struts on the corners the tower sought. In the tower corners are strut post after a slight angle
to put inside the tower and connected to the corner posts by short Pliers: wear an octagonal section steel rafters, the remaining four corners support equipment to the concrete by reinforced gables rest. The frame measures transmits the loads on the upper Turmkon-construction (Fig. 2) on the bottom and takes the here
ensuing horizontal forces. Here in the gable-triangles and anchored to the corner posts. The corner post in turn anchorages integrated into the reinforced concrete ring beam.

The upper part of the tower construction, the actual helmet is made, on the one hand from the supporting structure with the Pfettenkränzen and partly from the rafters with the roof skin (formwork, cardboard, slate). For the first three floors above profile steel frame is selected a network whose vertices per floor 1/16 are shifted from each other so that the ridges perform the desired rotation. The two lower floors are centrally übereinan the while the third is already 20 cm to the east ver-Is' choben!. From the third floor up to the helmet tip no more distortion is present. Here were the Füllhölzern of goats on the third floor of the pursuit of the Kaiser handle high out. The spire hangs by a total of 1.40 m to the east.

The key to the whole construction are the goats of the lower floors (Fig. 4 & 6). They are re regularly, ie the two trestle legs are of equal length and nestle Up to a Füllholz to with which they each by two and two hardwood dowels (Bearing capacity speed about 1000 kg), respectively. In this way, it was possible not only by all of the loads To transfer grain to grain, but but also considerable tensile forces within the include construction, are expected to arise in particular because of the one-sided tilt had.

Each floor encircling Pfet are tenkränze (Fig. 4 and 5) and each one crosswise stiffened bottom (Fig. 3) arranged net whose stiffeners also cables with nozzle are connected. The floors are strong up to a manhole with 3 cm, strong nailed floor coverings provided.

From the Füllholz of goats on the third floor of läilfen after Helmet tip struts halfway again by a recent purlin
held together ten are at the ridge and out of the bolt and components are connected by more a keyed round steel ring be taken. The struts for receiving twisting forces with Andrew's crosses in 4 levels verschwertet.

Because of the inclination of the upper part of the helmet was the only otherwise required above Kai serstiel up in the covering over the bell chair brought down; thereby became even better achieved anchorage.

The entire construction including the roof sheathing is with a proven Wood preservatives · salt impregnated on base in the immersion process short.

The belfry itself was a steel-construction carried out.

The Abbundarbeiten were not like at such a fancy design is to be expected, not very easy. In contrast, the erection went larly proportionate very painless; that was not last well on the exemplary work stand and the
spacious work platform at the level of the summit peaks. Woe: lort stood up, did not in any event  the impression that he is already SID1 be 30m above the ground.

Each timber had been overcome with the help of a construction and electric drive pulled up. According to which the lower part of the construction of the tower, inside and auf.gestellt the profile frame was attached in pairs-the bucks of the first floor were each represents and connected by the Aussteifungshölzer with the Emperor stalk. Similarly the next two stories were set up what essentially without zusätzlidle Scaffolding could go on. The setting up of the third and the overlying Floors can be seen alfs the attached pictures.

To align the struts and the Imperial stem still an auxiliary mast had to be made. From the series follow the images is clearly evident how this issue on the individual has been resolved. Above the third floor was to carry out the further Are work even created a small work platform, because the space there, as also from
the pictures shows it was no longer too plentiful. Finally, were the top attached the rafters down, with at each purlin flat steel anchors are fixed, and finally in the order gleidler are, and finally in order the gleidler applied formwork.

The Reconstruction went smoothly and without any accident withstanding. Meanwhile, the building has been in the first violent storms proved. Let's hope that the tower in the future all storms withstand and an equally venerable age reaches its like before predecessor.

The check digit on cutters
Large cutters, Abplattköpfe, knife shafts, slotted discs, etc. carry in most cases the
Approval of the factory producing factory, for example, n = 4000., This means that the concerned Fende
Tool has been tested for safety in a one-minute speed of 4000.

Since this check number, the maximum allowed speed in Indicates idle, every minute must the tool concerned with more than 3000 Run turns. Dignity., N= To work 4000 ", then would the tool cut excessively and will burn hot. · The rotation speed may therefore only be höd1stens 3/4 be the specified check digit. Importantly, the tool factory in order is placed indicating the speed of the engine. 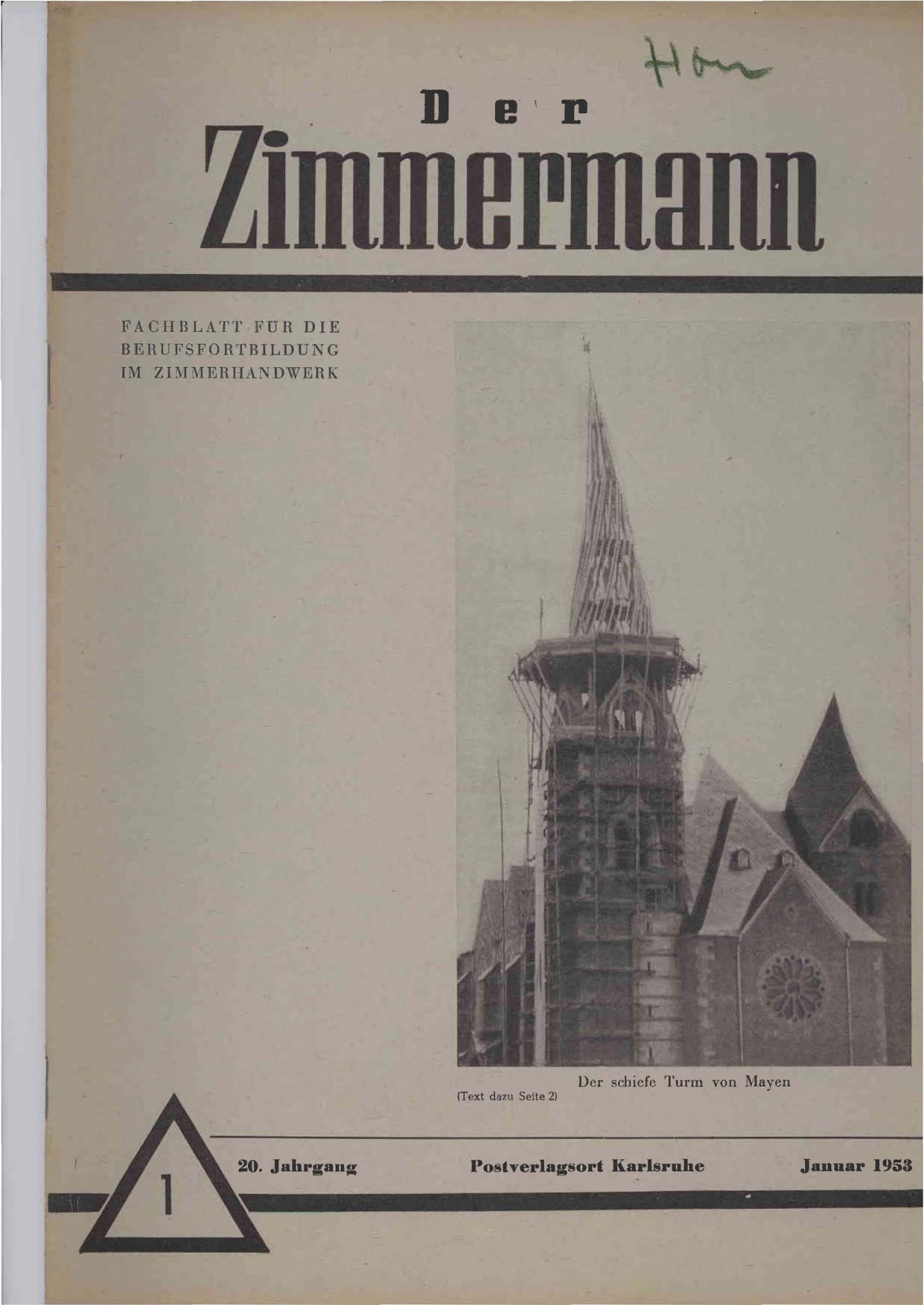 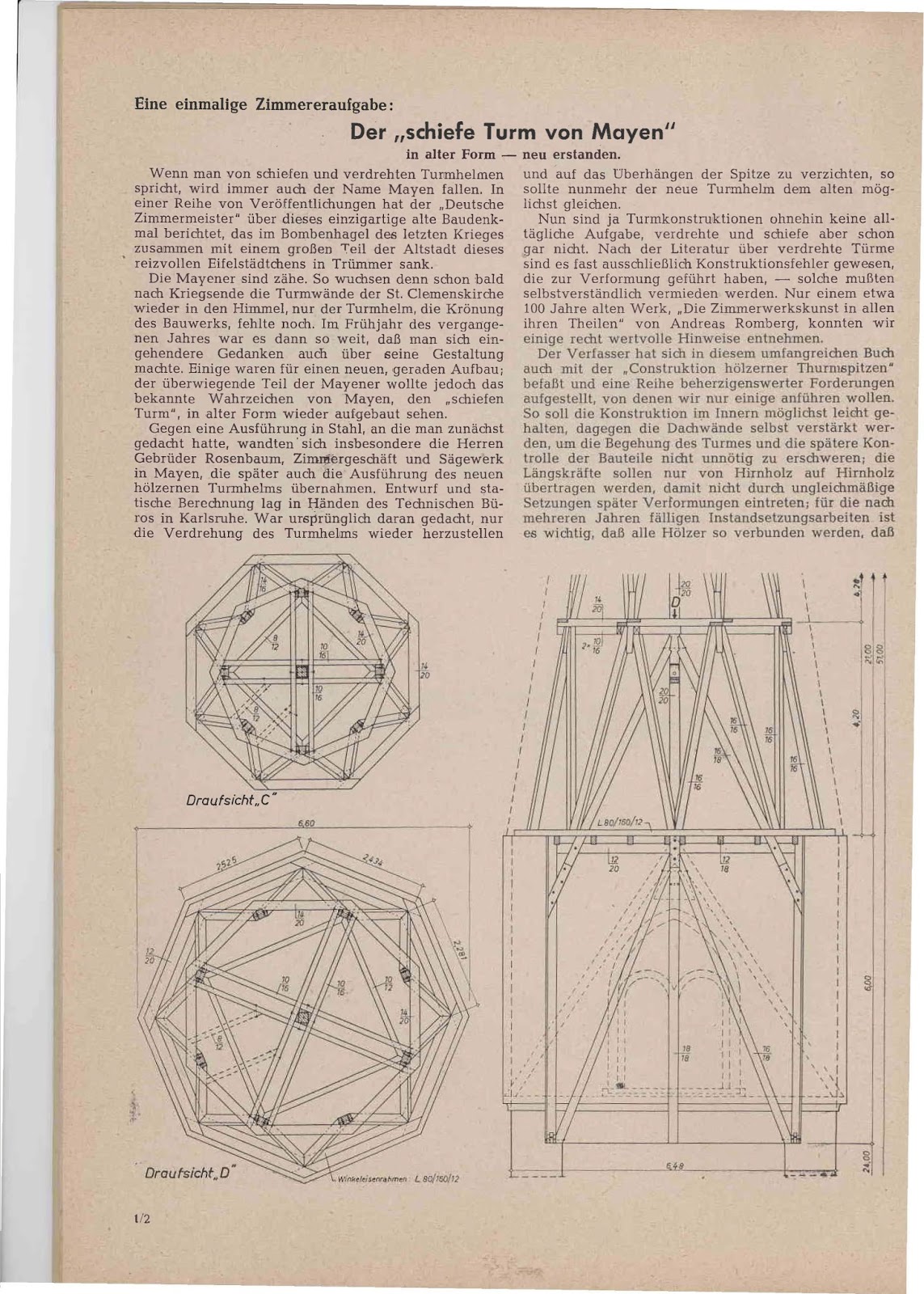 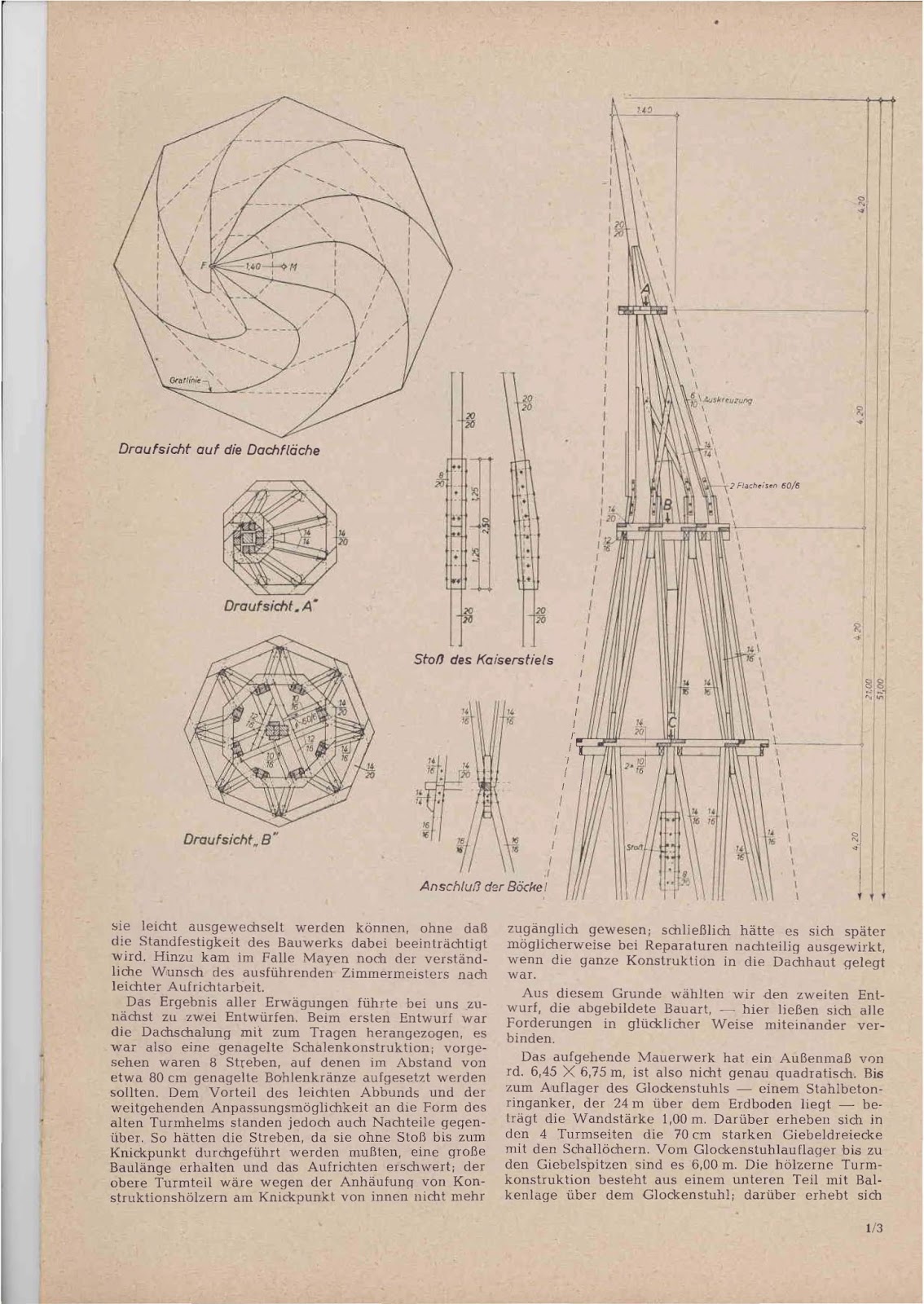 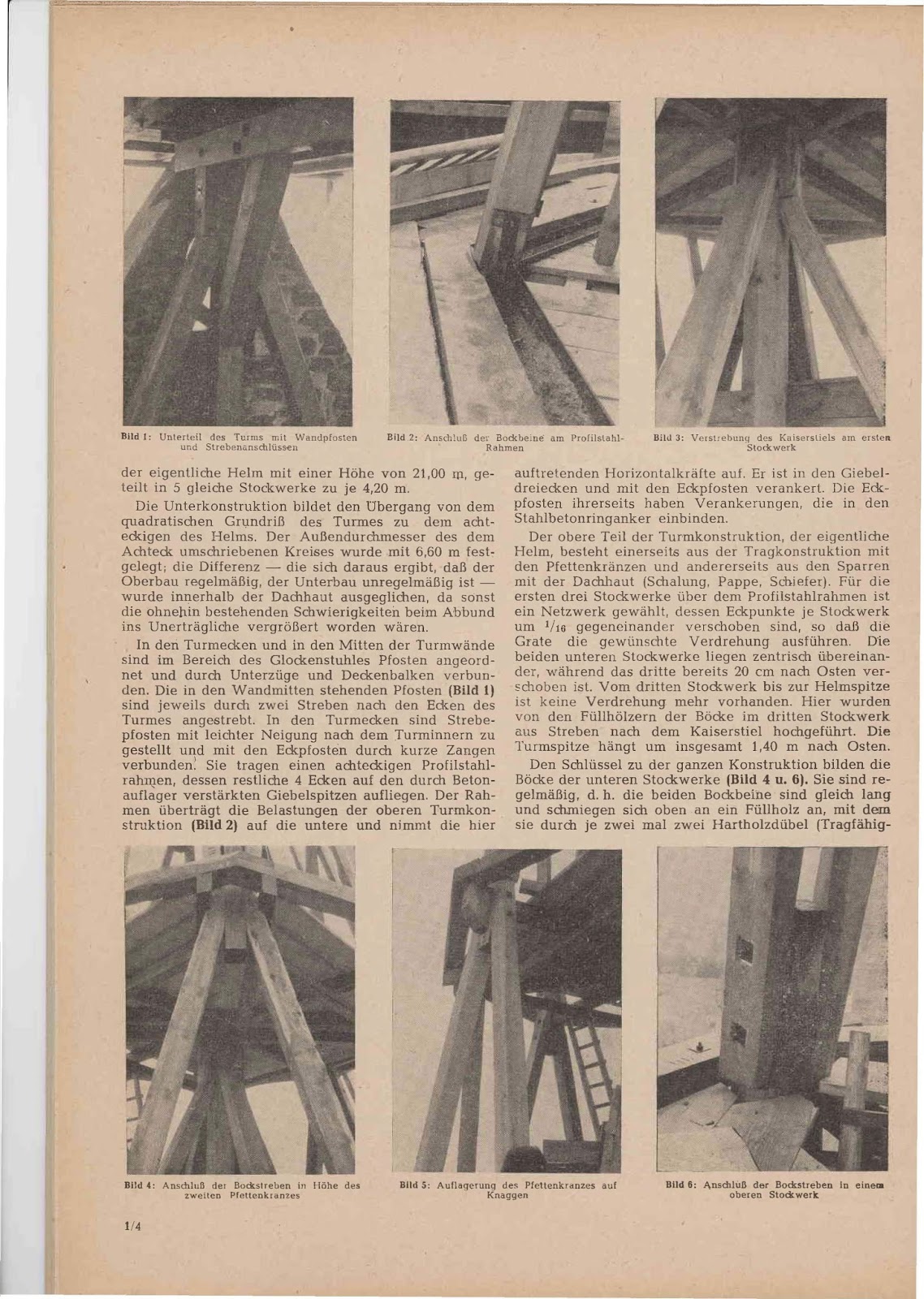 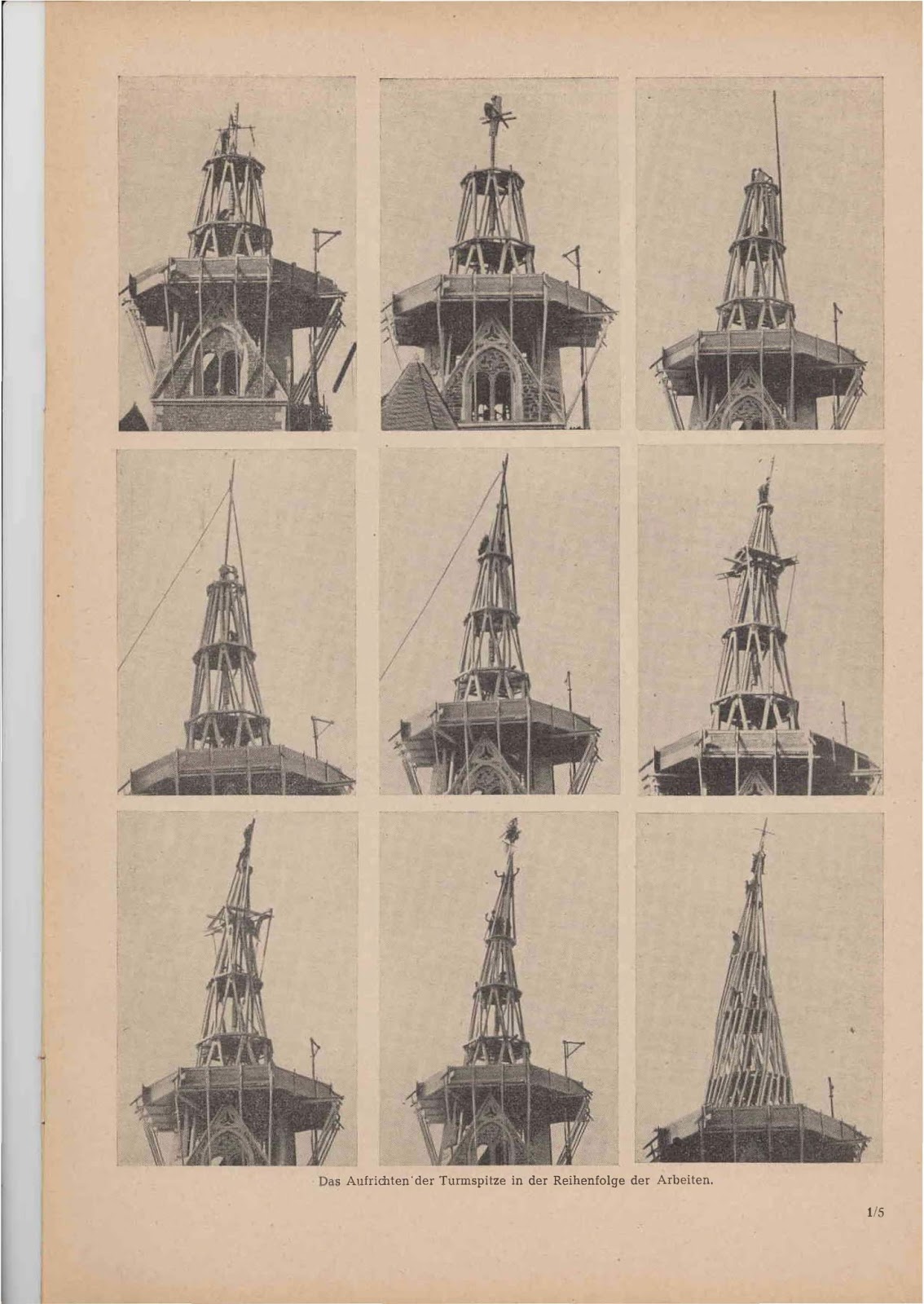 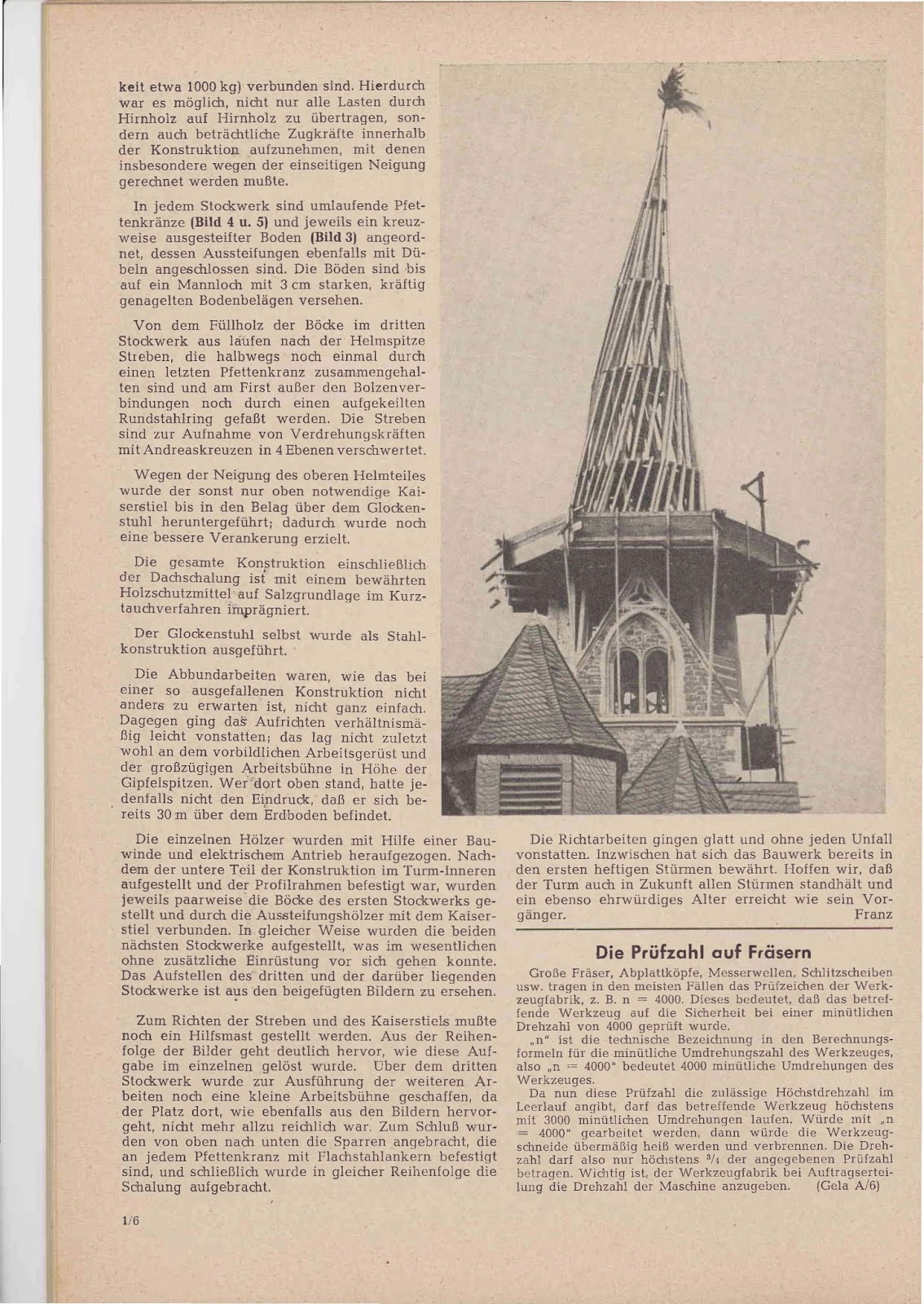