Link to the article www.thisiscarpentry.com

Here's a couple of pictures and text from an article  published in Building Age in 1929. This was common knowledge before World World II and is in most of the carpentry books published before the  production housing boom after the war.

A RAKING moulding is a term used for mouldings which are inclined ; as, in a gable, a moulding following the pitch or slope of the roof. To make a miter between a rake moulding and a level moulding, the profile or outline of one of them must be modified in order that the joint may be made. The cut for the level moulding is an ordinary miter cut or angle of 45 degrees. The cut for the rake moulding is the same as a jack rafter top and side cut. These cuts can best be made in a miter box using either the graphic method or the steel square method. 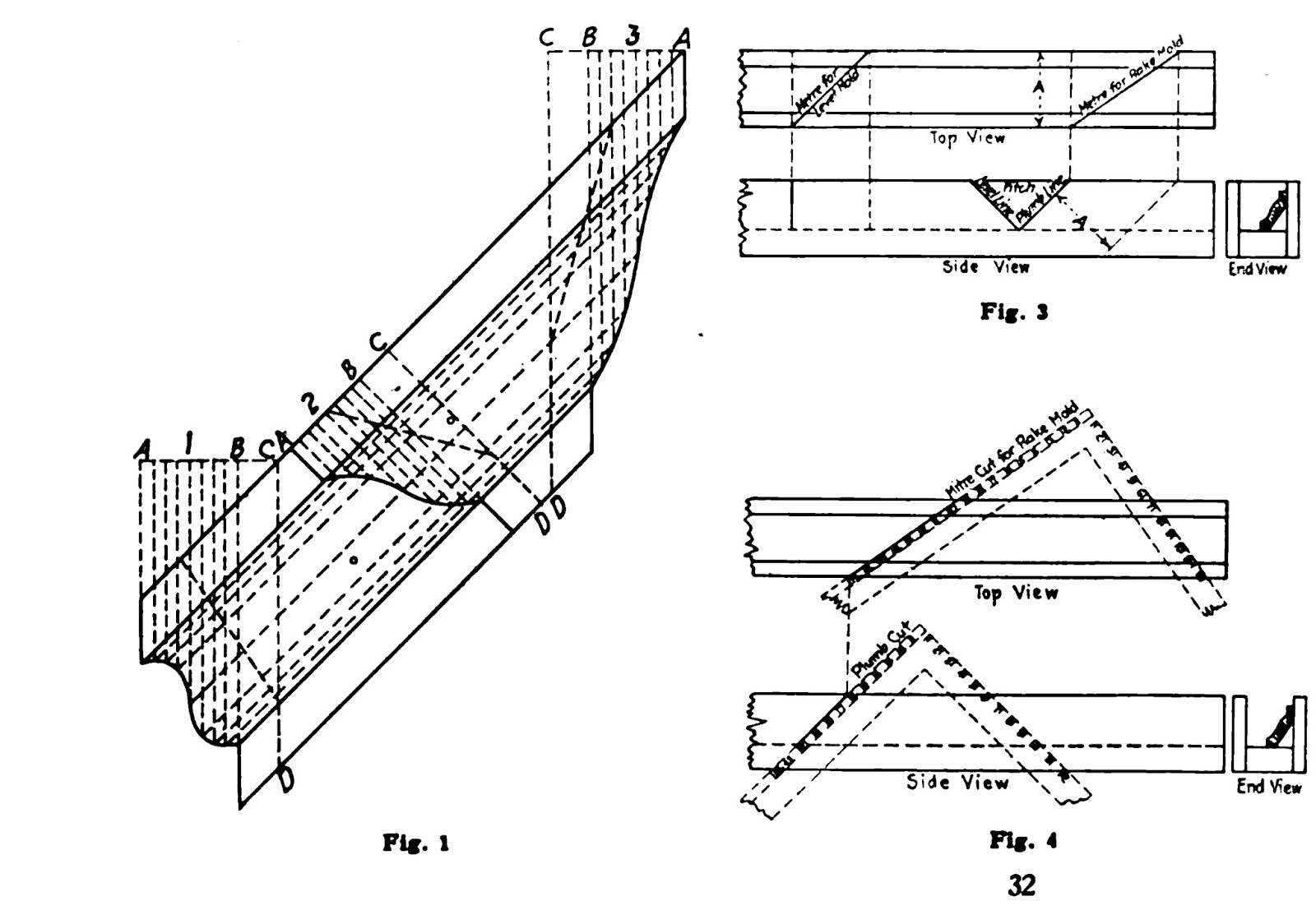 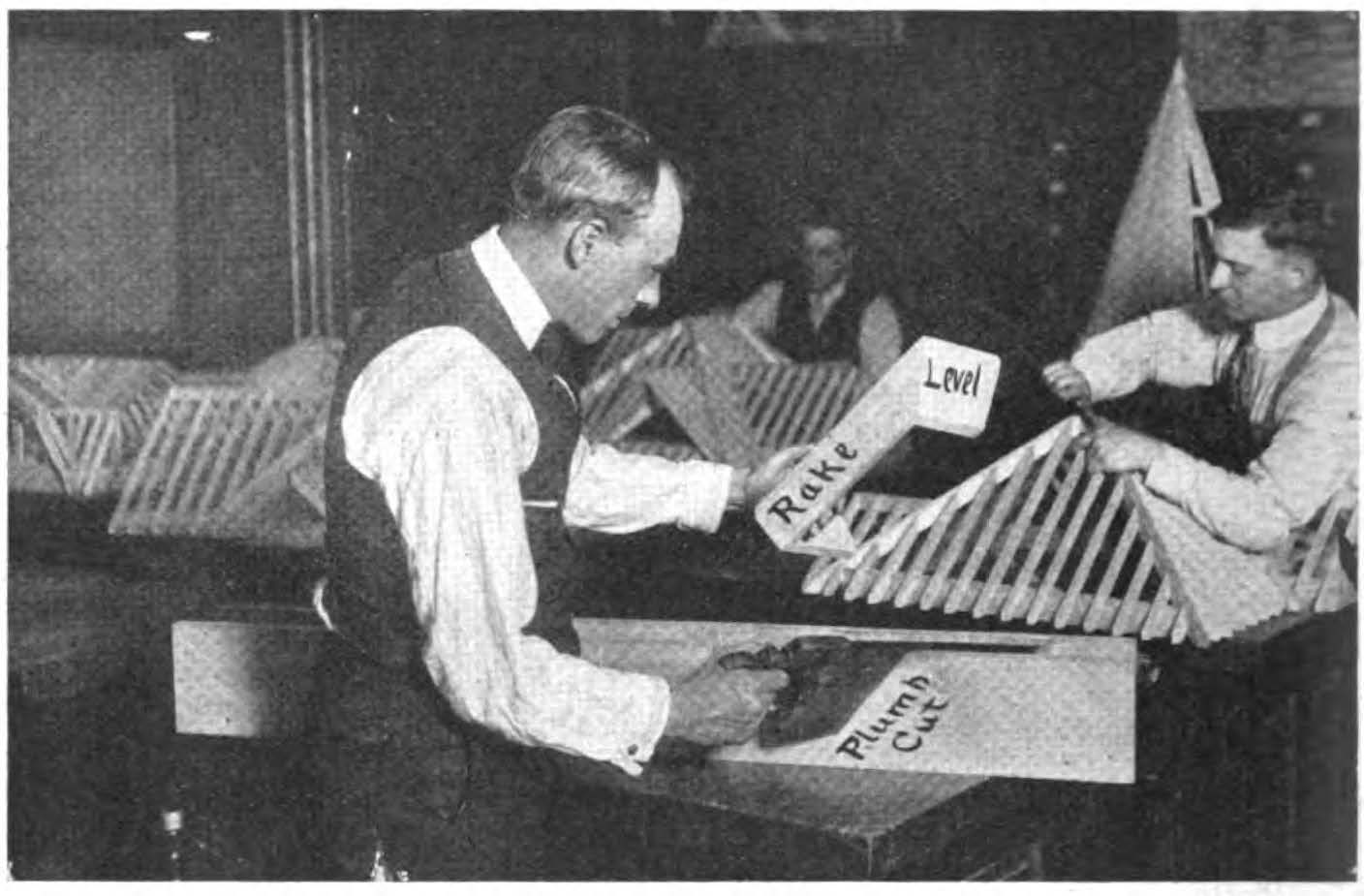 All nested crown moulding cuts in the horizontal plane, with the bottom edge of the crown moulding nested against the fence are the same as purlin or square tail fascia cuts.

All nested crown moulding cuts in the vertical plane, with the top edge of the crown moulding nested against the fence are the same as jack rafter cuts. 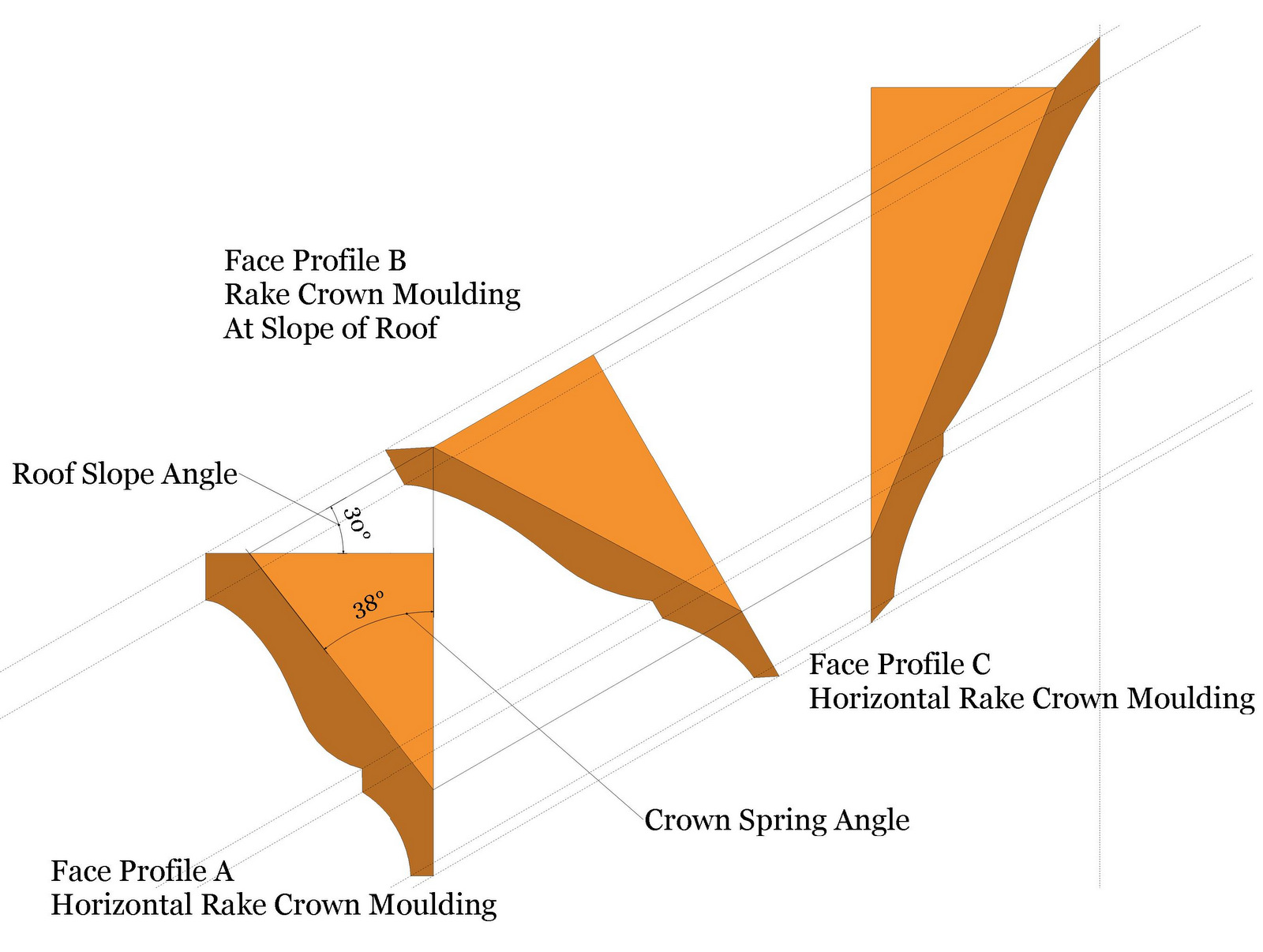 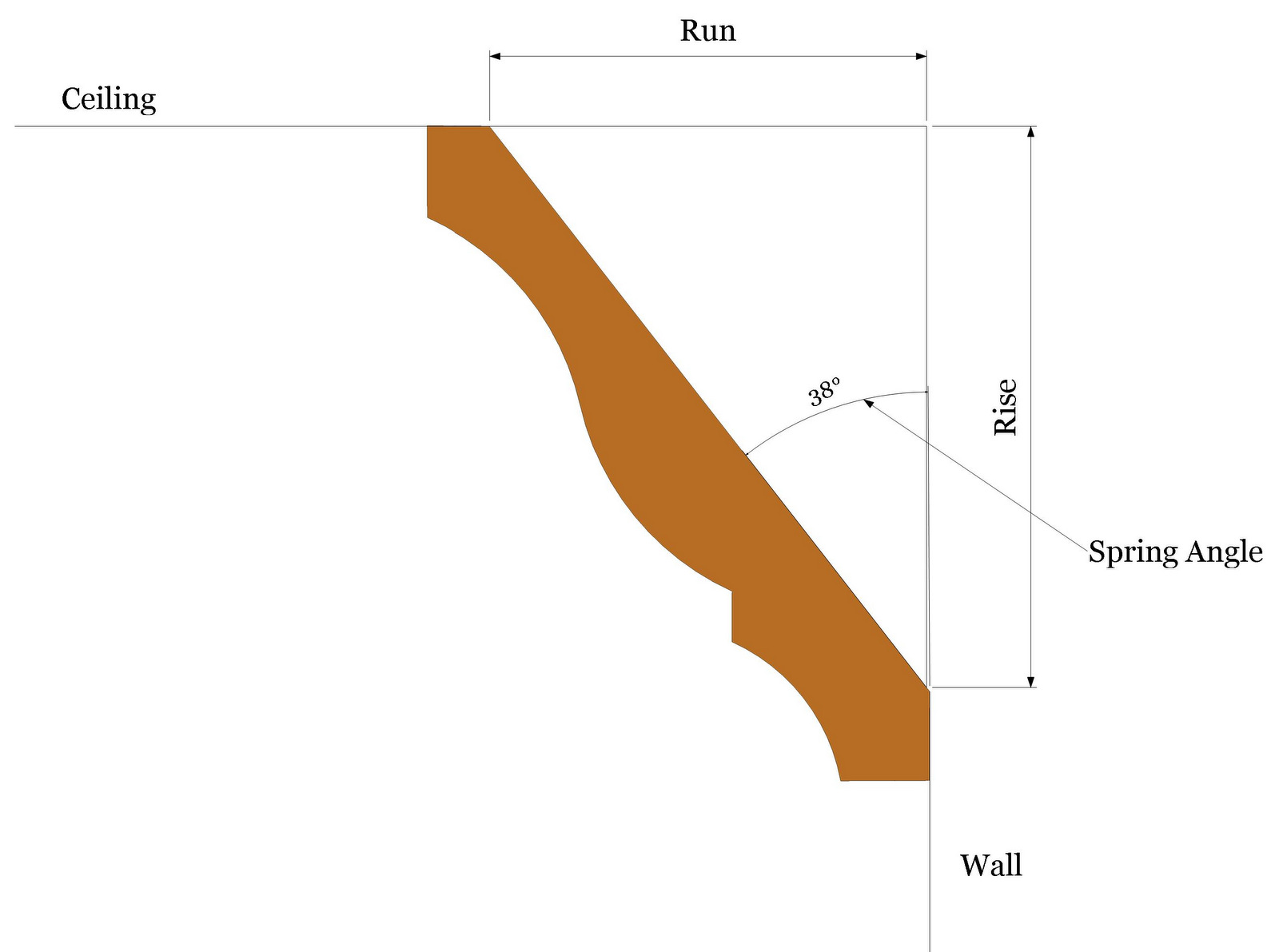 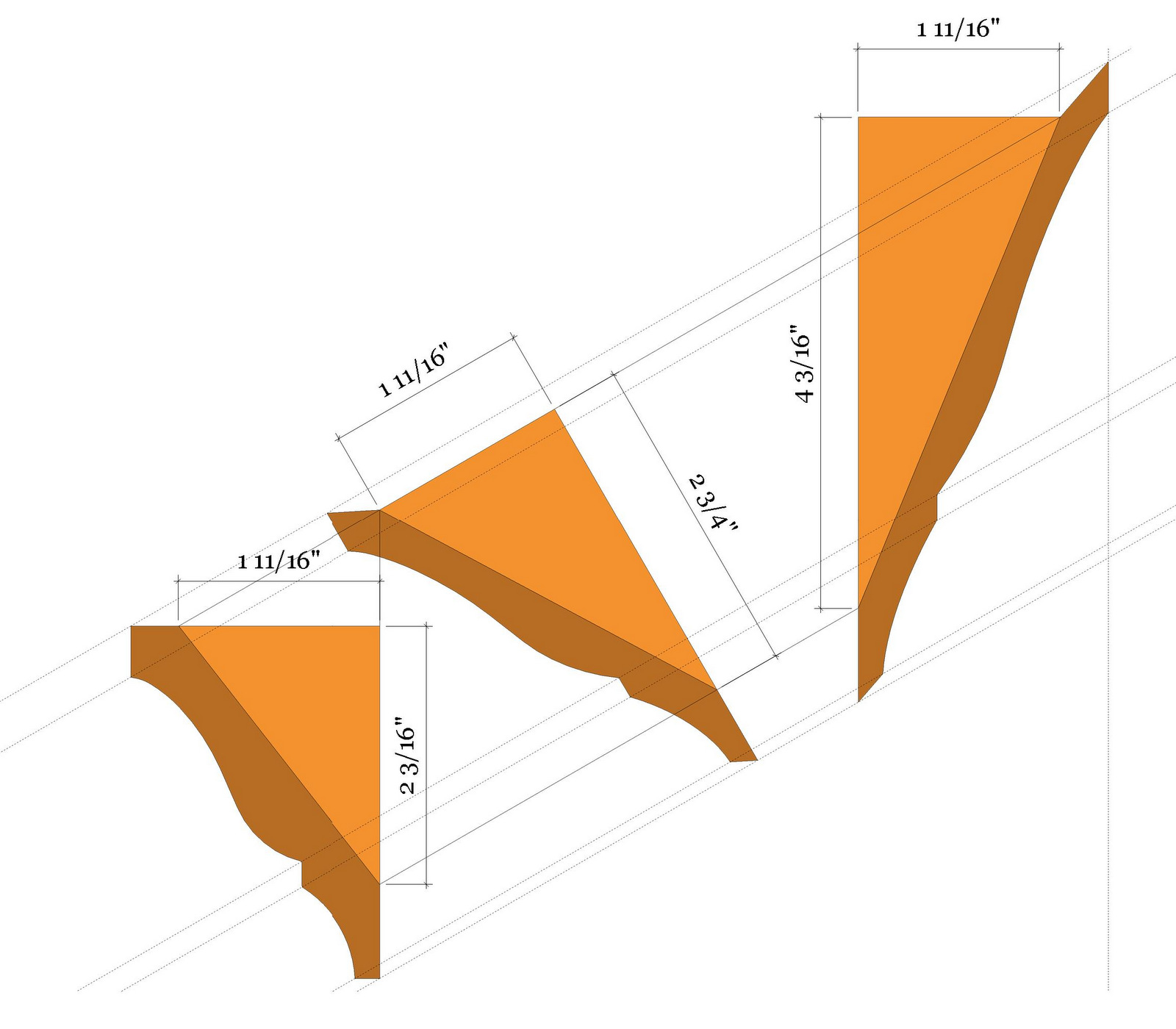 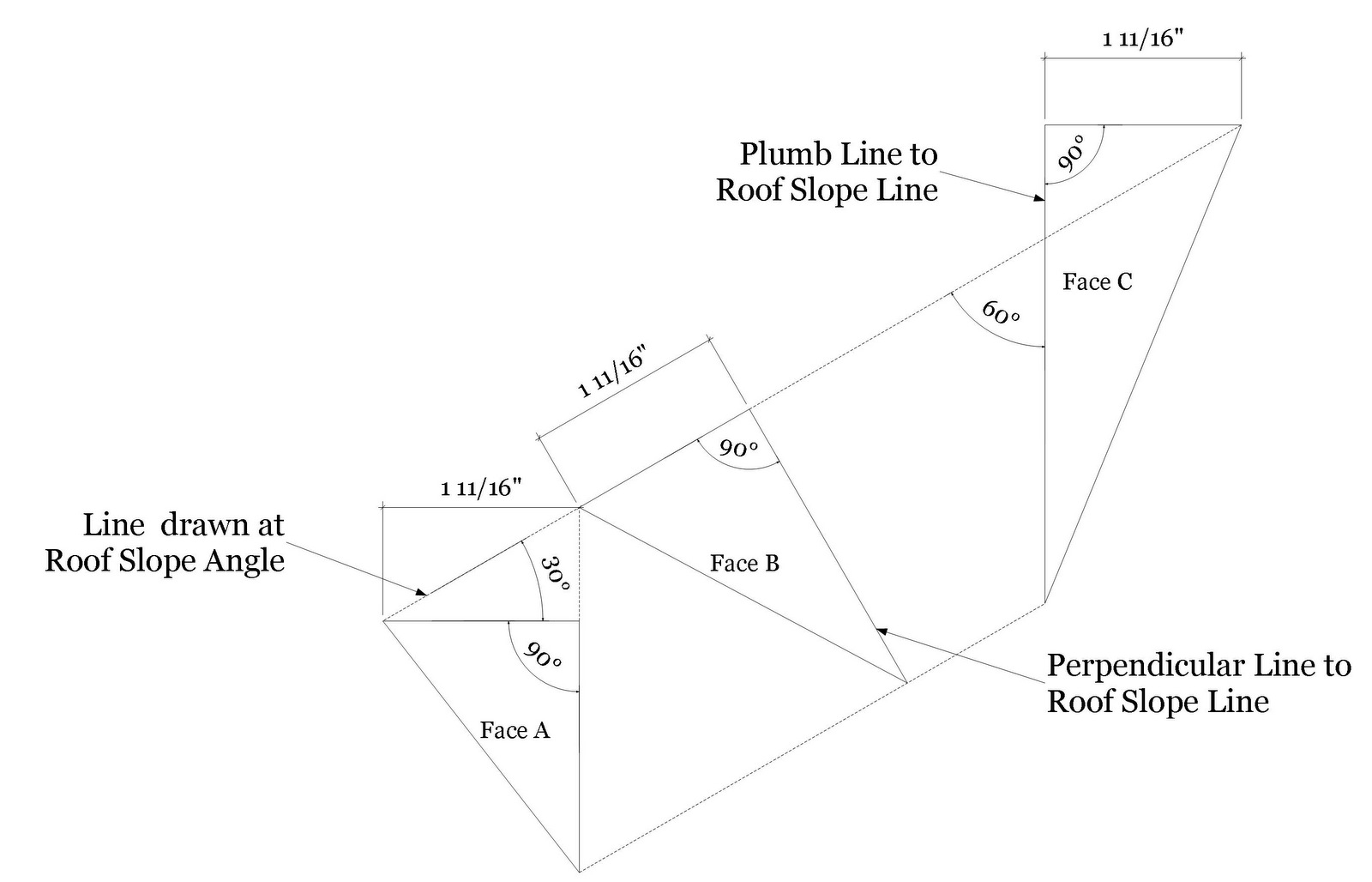 Next, develop the geometry for the folded out roof surfaces for the crown mouldings to determine the miter angles of each piece. The yellow area in the drawing uses the "run" dimension for the plan view of the crown moulding profiles.The crown slope angle of each of the profiles is used for the roof slope angle for developing the profile rafter length for each of the roof surfaces. The red triangle  in the drawing is the hip rafter and the miter angle for Face A is the same as the jack rafter side cut angle. For Face B in blue the jack rafter side cut angle is not used. You have to develop a line in the blue triangle that is equal to the same length as the hip rafter length in the red triangle. Swing an arc from the CP point in the drawing, using the radius equal to the length of the hip rafter in the red triangle. This will locate a point that is tangent to the base line of the blue triangle.  Draw a line from the tangent point  back to CP point. This line will determine the miter angle for the bottom of the rake moulding. Use the same arc-circle technique for the miter at the top of the crown moulding return. 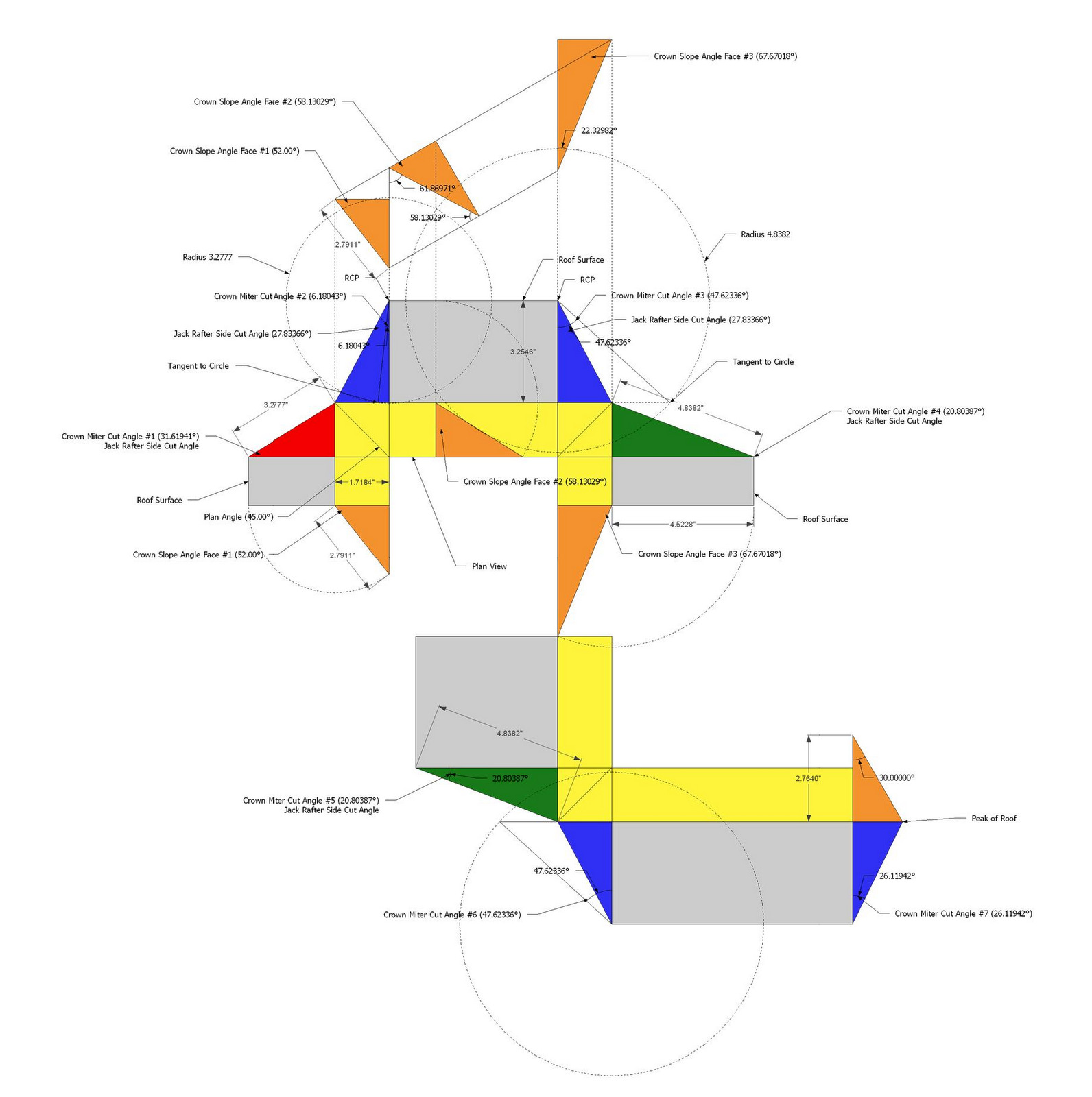 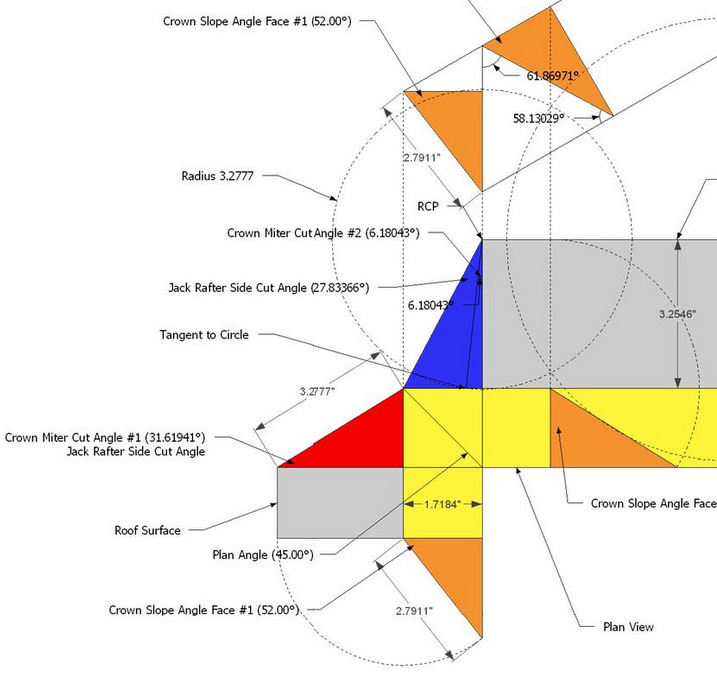 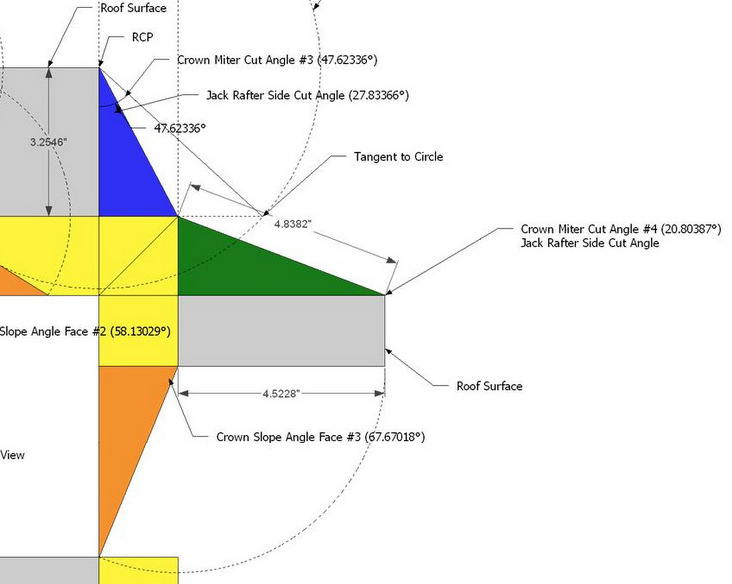 Another example of the geometry used to determine the miter angles for a roof slope angle of 42.00° and a spring angle of 42.00°. The one miter angle at the bottom of the rake moulding is equal to 0.00°. I tested the CrownMoldingTools app on my current task model that's not finished. Since the crown spring angle is equal to the roof slope angle the horizontal crown moulding is the same as square tail fascia. 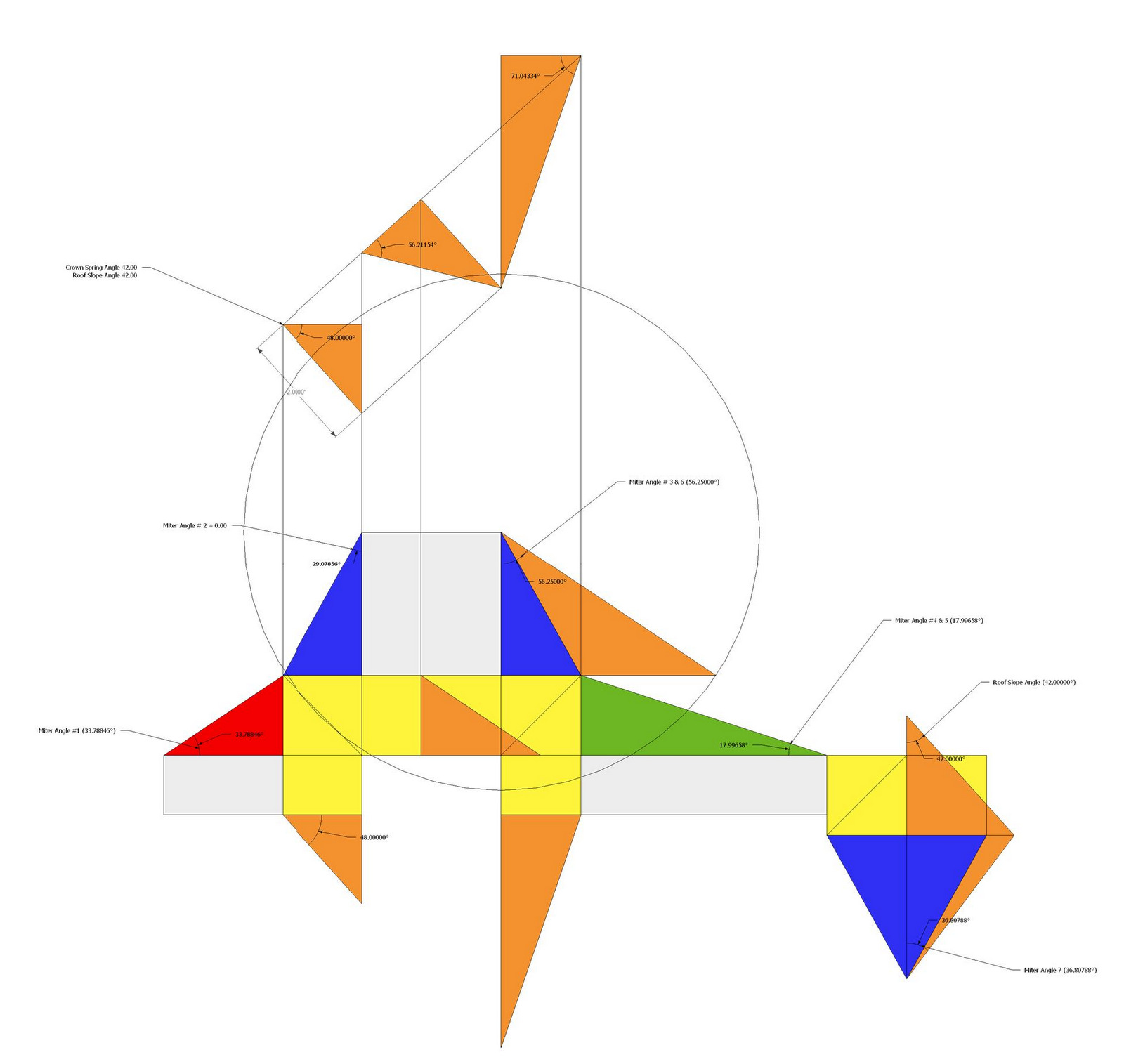 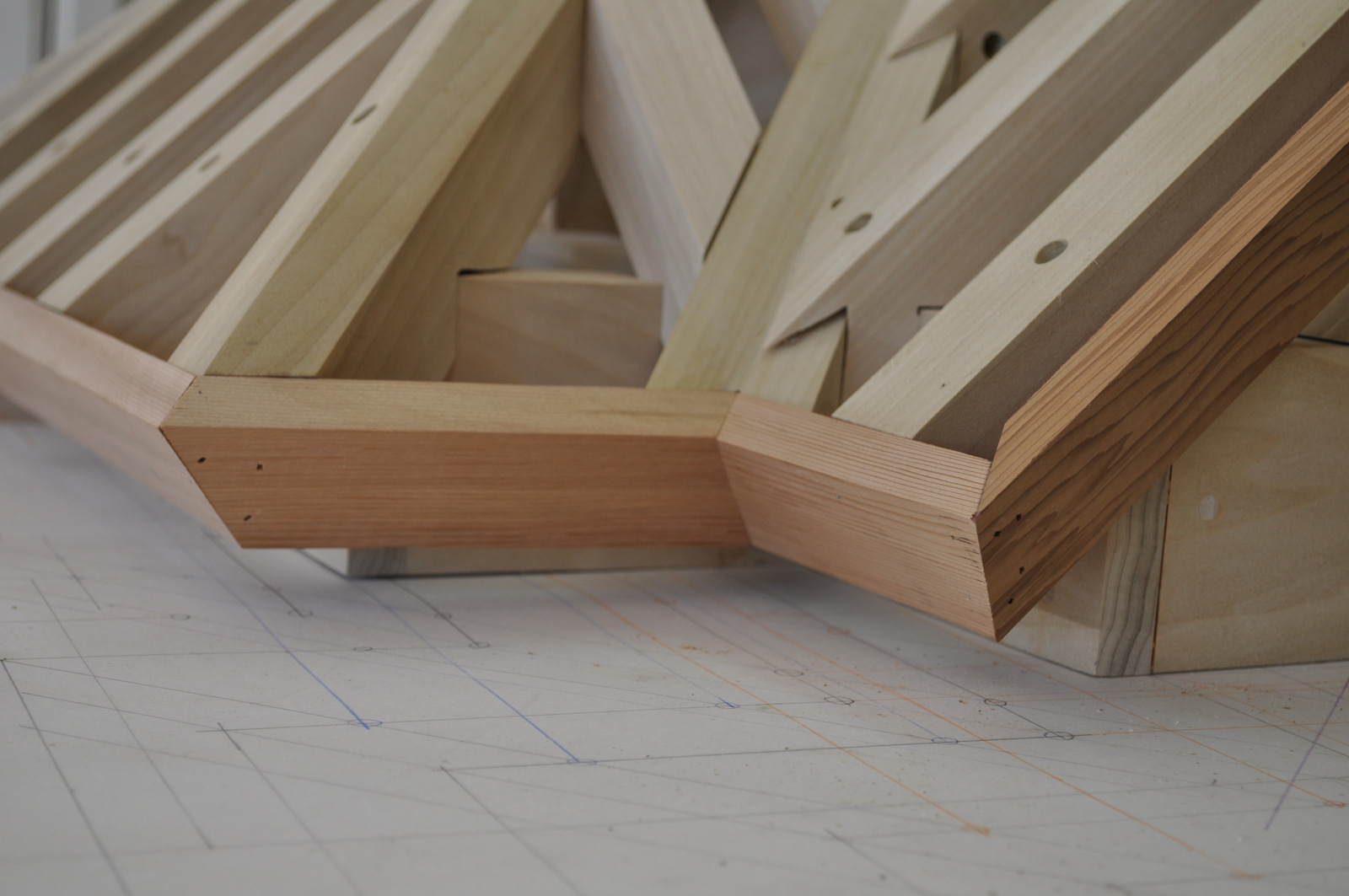 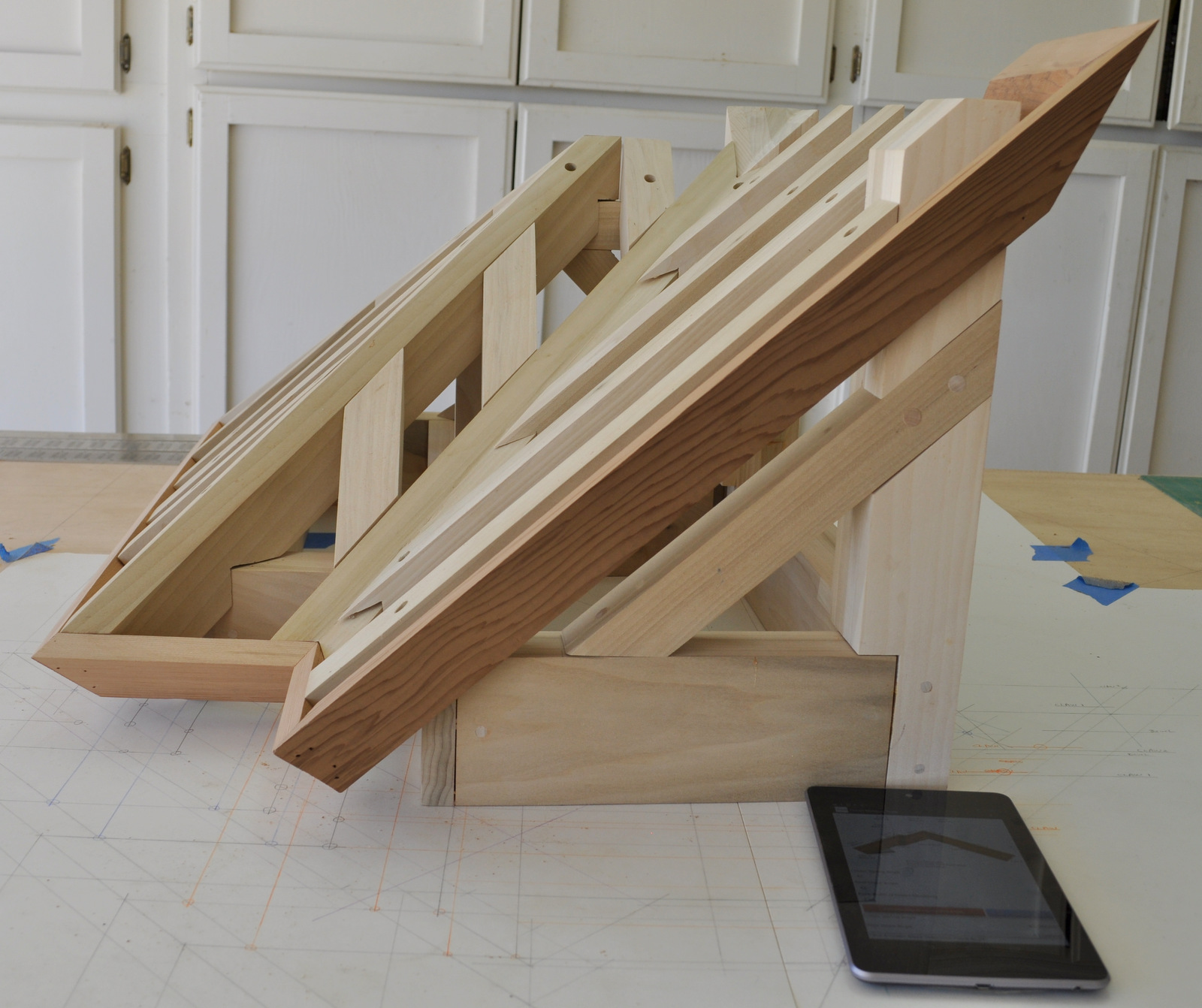 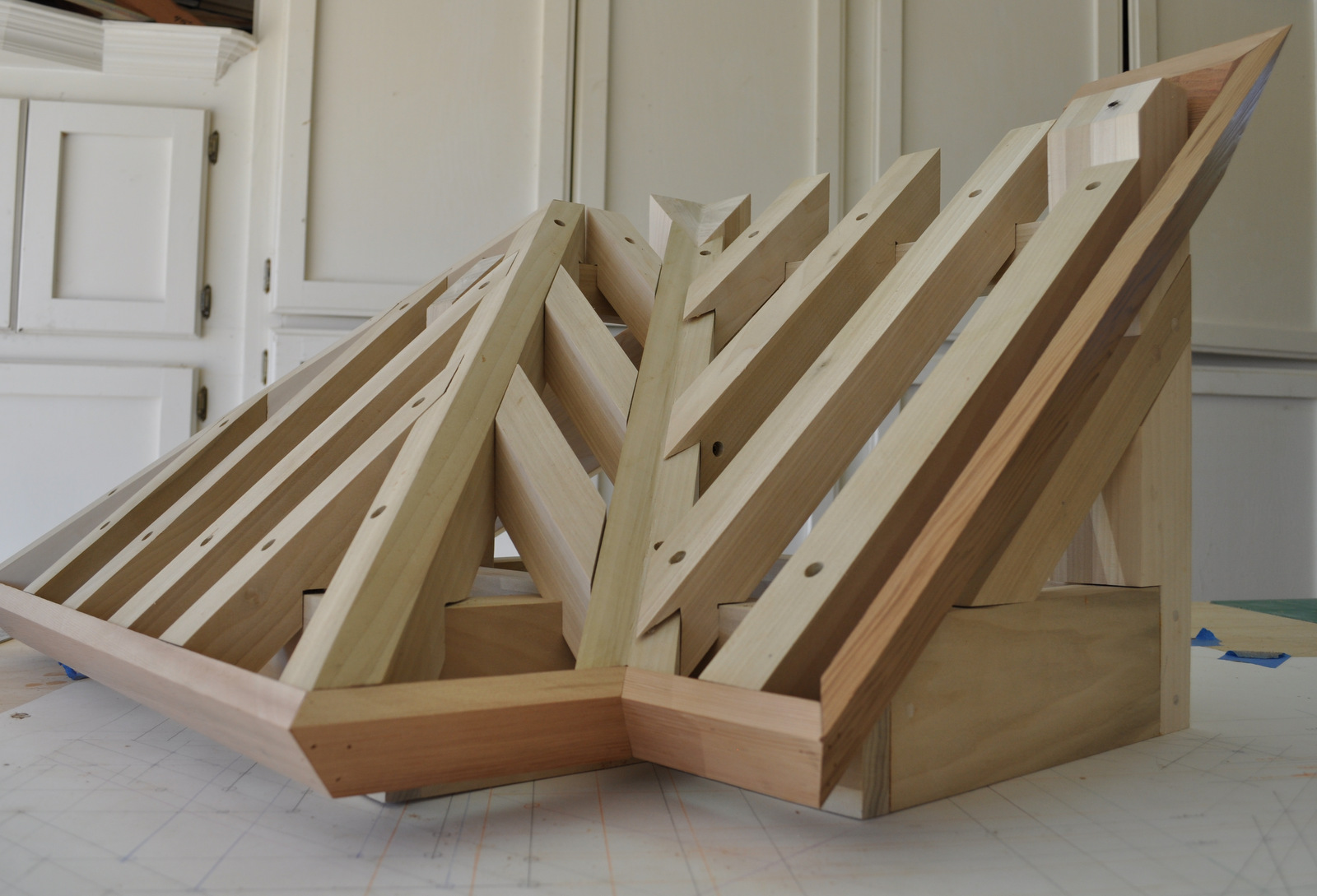 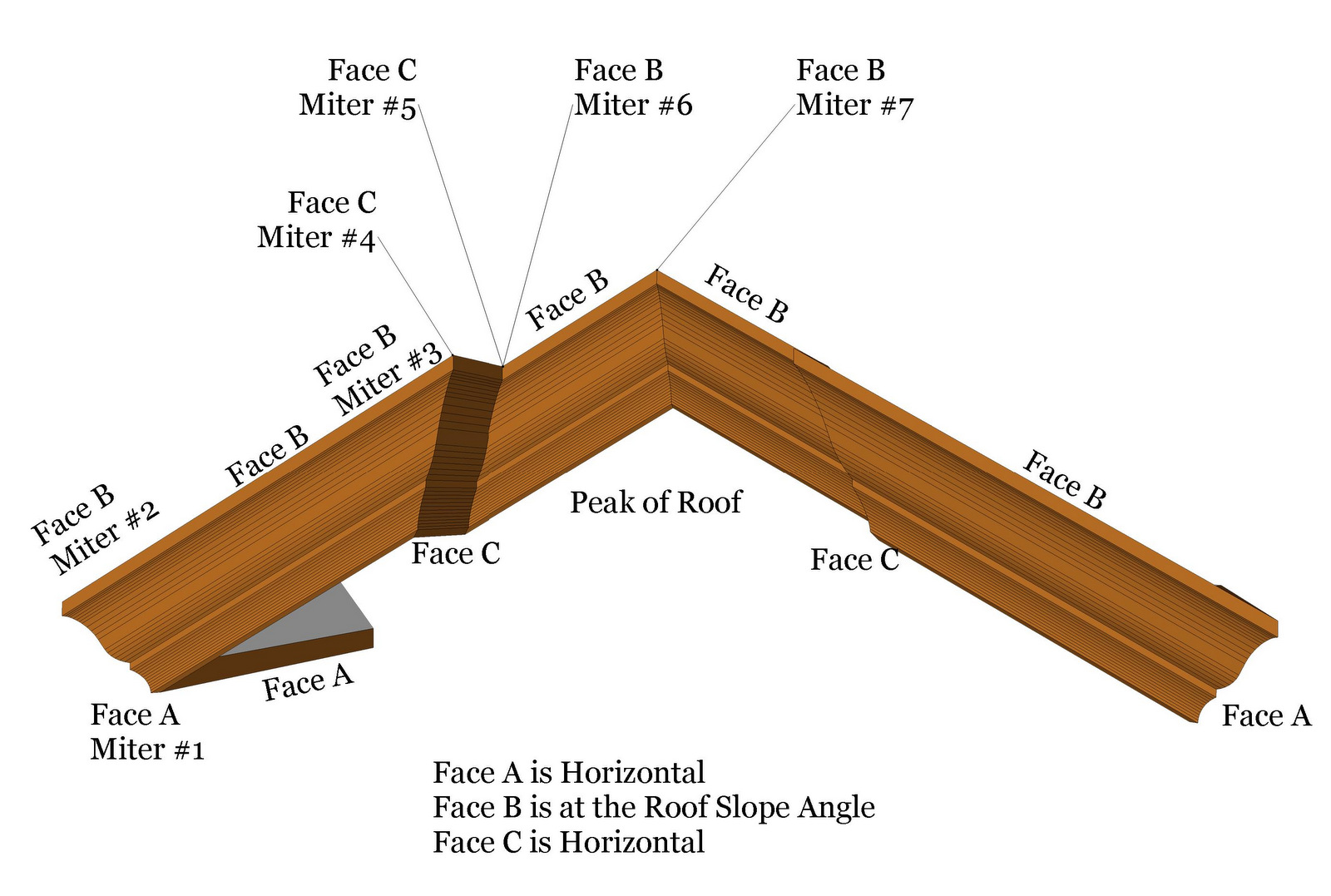 These compound cuts were anything but obvious, and changed with every roof pitch. Using mockups and trial and error, we eyeballed our way to some surprising ....
AUGUST 2008 l JLC l 4
21st-Century Greek Revival by Trevor Kurz

Finding Profile of Raking Molding.
From J. Q. F.—I would like to know whether you have heretofore published any Illustrations on the subject of raked moldings at half pitch similar In profile to that shown In the Inclosed sketch, and If so when. I should like to know the rules governing this problem, as I am frequently puzzled with it.

Answer.—We have In the past given more or less attention to the subject indicated, but as these volumes are now out of print we give a complete answer at this time. The sketch sent with the inquiry of our correspondent is that of a crown molding of ordinary profile, no plan or other view being given to show the adjacent arms of the miters which determine the desired result The problem in connecting with raking moldings which presents the greatest difficulty, however, is that in which an inclined molding is required to miter with a level return which is usually at right angles, it is sometimes at an oblique angle in the plan. We shall conclude, therefore, that this arrangement of parts is the cause of our error.

It is possible that the practical workman will prefer a method by which these results can be obtained without the use of drafting instruments. Such a method is not only possible, but quite practicable. To obtain the profile of the inclined or pediment mold shown in Fig. 2, let it be supposed that the fascia boards and the fillet of the level cornice below the pediment have already been cut and secured in position. First cut a piece of molding of normal profile to form the return P, cutting on its forward or right end an outside miter in the miter box in the usual manner, and fasten the same in position on the building as shown pictorlally at A of Fig. 4. Next cut a short piece of wood, say a foot in length, of rectangular profile, whose thickness shall exactly equal the projection of the mold as shown by 1 B of profile P1 Fig. 2, and whose width shall be equal to or even greater than the vertical width of the desired molding. Such a piece would have the general appearance of a short piece of studding dressed on all sides and may to called a blank. Cut a pitch board whose angle shall be that of the gable, and, having placed the same in the miter box with its vertex to the left, place the blank upon its upper edge and saw an outside miter; in other words, miter it to fit against the return piece A just as though it were the finished mold. Here's an example of large rake crown moulding on Gary Katz's website that should be cut laying flat in the compound miter saw.